skip to main | skip to sidebar

Most of my trading has become writing options.  I also trade a SPY system.

I have not been posting anything recently here on this blog.

I would recommend them highly.

A great option presentation for Free from Tastytrade

I would highly recommend anyone who trades options to watch this FREE presentation - 6 hours.

They have not yet launched their futures trading yet but it should be any day now.
Posted by Denarii at 9:12 AM 1 comment:

I have been trading for nearly 40 years.  I have traded everything I think under the sun.
-
I have had periods of good success and lots of periods of not so good success.
-
Most of the recent posting has been of futures trading. At best, I am a break even futures trader.  And at my worse times, I am losing about 5k a year.
-
Not too long ago I started trading options again.  I decided to trade by selling premium. My previous option trading was either covered calls or trying to get into stock positions at better prices.
-
I gave it try and had a good track record except for my P&L. I was mainly selling naked put options on earnings plays.  I had 34 wins and only 2 losses but those where two very big losses.  My net was -$578.44. The two losses were $2600 and $1500. The first I should should have gotten out a -$300 and then I had two break evens chances.  Neither I took. The second trade I could have covered my position in premarket by selling stock short for a loss of $600 but instead tried to recover my loss once the market opened. Bad idea.
-
I felt I needed some training but did not want to pay a lot for it. This is when I came across Tastytrade.  Their training was free and tons of it.  I found out very quickly I did not know what i was doing and i was taking insane risks at times - aka I was very lucky.
-
Since I learned a ton of stuff from them (and I am still in the process of learning),  I have made money.  Trading has become easy again for me like it was in the late 90's but on the other hand, it was easy for everyone back then.
-
My trading record using the Tastytrade way of trading is 86-15-17 (closed trades) with a profit of $4,468. I have open trades (17) with a combined loss of $1600.  One open position is accounting for most of that at $1,200 (frustrating earnings trade - lol). Once you learn about option trading, you will find you will have a lot of open positions at losses because you are always taking your winners quickly.
-
I am still doing a lot of mistakes but things seem to be working for me.
-
I am also trying to figure out the best way to post what I do.  I think posting is a good way to make sure you keep track of yourself.

Posted by Denarii at 6:50 PM No comments:

Tom Sosnoff (the guy who built Think Or Swim so this is not a fly by night operation) has opened a new brokerage firm called Tastyworks.com.

Assignment fees of $5.
No data fees.
no platform fees.
no minimum trading fees.

Stocks and options have been trade able since 1/3/2017 and the futures will launch in about a week.
I have been with them since mid January and could not be happier.
If any one has any questions - please ask.
They also have tons of free content and training at tastytrade.com and you do not need an account to access the training. They also broadcast live trading programming for 8 hours a day between 8 to 4 est and that is also free.

These guys are great.
Posted by Denarii at 9:03 AM 5 comments:

I am not dead-went to a great presentation.

I would highly recommend watching this presentation about trading and taking risk.

I hope to figure out what to post here and start posting again.
Posted by Denarii at 10:20 AM No comments: 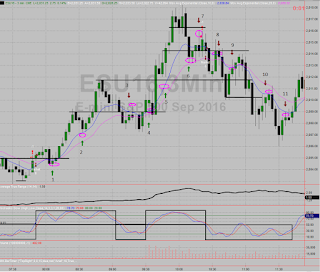 I should have made a butt load of money but instead I had my head up in it. I think of 50% pullbacks of the last swing as being a great place to enter. Very simple system.  Today, it had 11 chances by my count.  Two near misses, eight wins and one loss (last trade).  A win I consider is any trade that goes a point in your favor before going two points against you.  I only made one of these trades today.  Life got in the way on a few of them but I should have taken 4 or 5 more today. I have lost some of my nerve with all the craziness of the Brexit market swings.

Denarii
Will you work for a Denarius? - In other words "a day's wage". I am an individual trader that has 25 years of both good and bad trading who decided to take up Day Trading in hopes of earning "a day's wage" and leave the rat race forever.

This blog is only a dumping of my mind. I will at times make suggestions on how to make money. If you follow them, you are on your own. With blogs - you get what you pay for and if you follow my suggestions - I will consider you crazier than I am.